The legal definition of CSE, published by HM Government on 16 February 2017 is:

“Child sexual exploitation is a form of child sexual abuse. It occurs where an individual or group takes advantage of an imbalance of power to coerce, manipulate or deceive a child or young person under the age of 18 into sexual activity (a) in exchange for something the victim needs or wants, and/or (b) for the financial advantage or increased status of the perpetrator or facilitator.

“The victim may have been sexually exploited even if the sexual activity appears consensual. Child sexual exploitation does not always involve physical contact; it can also occur through the use of technology.”

There are children in Redbridge who are being exploited.  There are different types, the main ones being criminal exploitation and sexual exploitation, which can occur independently or together. We know this because exploitation of children and young people has been identified throughout the UK, in both rural and urban areas, and in all parts of the world. It affects boys and young men and girls and young women.

It can have a serious long term impact on every aspect of their lives, health and education. Adults working with children, young people and families need to be aware of the signs of exploitation and what makes some children and young people more vulnerable than others.

Businesses across the Borough are  asked to do their part to identify and stamp out Child Sexual Exploitation as part of Operation Makesafe. 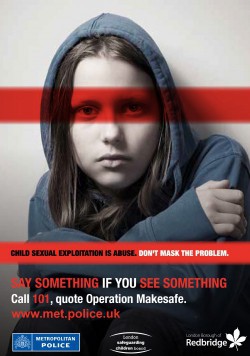 The Police and the Council have sent letters to hotels, guesthouses and taxi companies in Redbridge asking them to sign a pledge and commit to tackling the issue. Along with the letter businesses will also receive awareness raising materials that they are free to use and display.

By encouraging local businesses to “say something if you see something” the Police and Council hope to build an awareness in the community about the issues and encourage these businesses to commit to zero tolerance of CSE.

The following signs and behaviour are often seen in children who are already being sexually exploited:

How are we tackling child sexual exploitation in Redbridge

There is a co-ordinated multi-agency approach to tackling CSE across the Borough, based on our multi-agency CSE Prevention and Intervention Strategy (2nd Edition), 2018  and these include:

A Working Group, chaired by the Redbridge CSE/Missing coordinator  is taking forward a number of work streams which will provide support to schools in relation to raising awareness of CSE.  See below letters from the RSCP (formerly LSCB) Independent Chair to Headteachers in Redbridge:

If you have concerns or suspect that a child is being sexually exploited please telephone Redbridge Council on:

Alternatively, you may complete and submit a LBR Multi Agency Referral Form (MARF) Template to CPAT.referrals@redbridge.gov.uk.

Research, Resources and Guidance for Practitioners